Zucchini noodles taste great. They’re fresh, have a nice bite, and are healthy for you! All you need is a spiralizer that you can purchase online or in most kitchen stores.

Making the noodles is fairly simple, and you can typically buy zucchinis for a bargain at your local grocery store.

If you’re interested in trying zucchini noodles, we’ve put together some helpful information on how they taste and some other nice facts about zucchini. Let’s take a look and see if they’re worth a try!

One of the best things about zucchini noodles is that they don’t have a strong flavor. One of the reasons that people use zucchini as a pasta substitute so often is that the noodles tend to take on the flavor of the sauce. You don’t get an overpowering vegetable flavor that takes over your pesto or marinara dish.

Zucchini noodles also do a nice job of soaking up juices and other flavors in the meat or sauce that you’re preparing it with. The longer you cook them, the more their texture changes, so you can play with the noodles to find a crunch or softness that you prefer.

Most people who eat them tend to say they taste a bit like spaghetti, only with a more nutritious flavor that comes from it being a vegetable.

Are They Good for You?

They’re a great way to up vegetable intake for kids and other people who may be picky eaters because they come with delicious sauces. Zucchini noodles typically only have 19 calories per cup, so it’s a great way to eat some of the traditional dishes that you love without guilt.

Are They Supposed to Taste Sour?

Sometimes people report that their zoodles taste a bit sour. Some zucchini noodles indeed have a bit of a citrusy or vinegar taste to them. Usually, it’s most notable when the noodles are eaten raw. Cooking them is a good way to reduce any sort of sour taste in your zoodles.

Of course, if things taste too sour, then you may want to steer clear of that batch of zoodles. Because they are vegetables, they don’t have a shelf-life that’s comparable to something like dry pasta. They will spoil easier, so you’ll need to eat them much faster than you would other types of noodles.

What to Do if They Do Taste Sour?

Some people still eat zoodles that taste a bit sour because with sauce it’s barely noticeable. Depending on how you’re cooking it, you may be able to get past it. That said, if you’re preparing some sort of light pasta dish, like a pasta salad, it may be impossible to get around.

Toss the zoodles or set them aside for tomorrow when you can stir fry them with some stronger marinade.

Are Zucchini Noodles Worth the Extra Price?

If your budget is tight, then you’re going to notice that it costs a bit more to make zoodle spaghetti than with normal dried pasta. Anytime you’re using fresh produce instead of something that can last years, you’re going to pay more money.

You’re paying for the grocery store’s cost of shipping, cooling, and maintaining the zucchini to keep it fresh until it can make its way to your table.

However, how much is health worth?

To us and many others, zoodles are worth the extra money. You’re going to pay more for that zoodle pasta dish, but you’ll have peace of mind knowing you and the people you are feeding are eating something much healthier than if they were eating traditional noodles.

Another concern is that zoodle dishes don’t last that long in the fridge. You can’t make a ton extra and survive off of leftovers for the next week or two like you can with normal lasagna or something. You’ll have to eat it rather quickly.

Leftovers are fine, but nothing more than a couple of days.

However, one of the benefits of making zoodles and buying zucchinis is that you can always turn leftover vegetables into delicious zucchini bread!

For people interested in making zucchini and other vegetable noodles, a spiralizer is a must. This is a tool that you use to cut the vegetable into small pieces that resemble noodles.

Luckily, there are a ton of affordable spiralizers online on sites like Amazon that make getting to zoodles super easy. Bonus points for also letting you spiralize things like carrots, potatoes, beets, and other vegetables!

Here’s an example of a good spiralizer with a ton of positive reviews. 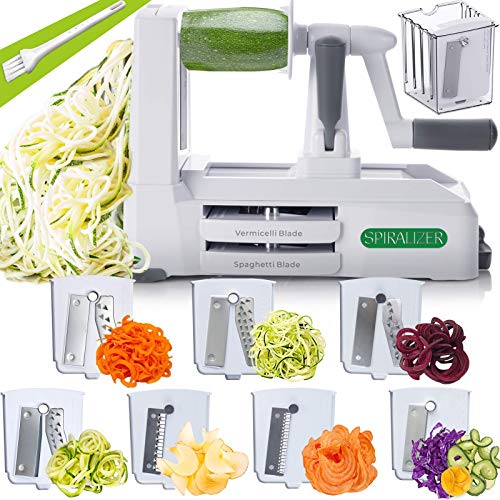 Can You Use Yellow Zucchinis for Zoodles?

Yes, yellow zucchinis will work, but your zoodles will probably be squishier and have a softer texture. They also tend to turn a bit slimy after a day or two, which is why so many people stick with green.

Green zucchinis offer a good crunch to them and they last longer. If you want to try yellow zucchinis, give it a shot mixing them with green, and see how things turn out.

We hope this helps you take the leap and finally give zoodles a try.

They’re a terrific low-calorie alternative that is healthy for you and your family.

Give it a try and add some delicious sauce and everyone will be raving about what a great dish it is. They won’t even miss the old pasta noodles that much.